So, you’ve decided to pay off your loans. You’ve taken stock of your current situation. You’ve found the detailed information about your debt. You even figured out your income, expenses and made a plan on how to get extra money to pay off your debt faster. You’re doing great.

However, deciding which pay off method to use to pay off your debt can be frustrating for some people. My wife and I were in a similar situation just a few years ago. My wife had $80,000 of student loan debt. We were ready to pay off the debt, but we had a hard time deciding which methodology to use. This is what we found out.

If you’ve been doing any research, you’ve probably come across two popular methods to pay off loans. The most common methods are the debt snowball and the debt avalanche. However, you may be having problems choosing which method to use like we did. First, we’ll explain exactly how each method works. Then we’ll give an example of each method. Finally, you’ll learn how to choose which method is best for your particular situation.

What Is the Debt Snowball Method?

The snowball method works by making the minimum payment on all of the liabilities you owe. Then, you’ll take the extra money you’ve dedicated to use toward paying off your debt and apply everything that’s left toward the loan with the lowest amount owed. Once the lowest balance loan is paid off, you take the minimum payment and extra money you were paying toward that loan and pay it toward your loan with the next smallest balance owed. You continue the process over and over again until you pay off your last loan in full – just like a snowball.

To visualize how this works, imagine rolling a snowball down a hill. It starts off small, but slowly grows larger and larger the farther it rolls down the hill. The snowball is the payment you’re making on your smallest balance loan. It starts out small, but as you pay off each loan, the payment grows. By the time you get to the loan with the largest balance owed, your snowball payments should be large enough to knock out the loan faster than if you had simply started paying off your largest balance loan first.

The idea is that you’ll pay your first loan quickly. The quick pay off gives you a mental boost to help you feel like you’re making real progress on paying down your debt. Then, your next smallest balance loan should be another quick win. As you keep knocking out loans, the larger snowball payments make paying off the larger balance seem more realistic than if you had simply split your debt pay off money equally across all of your loans.

An Example of How the Debt Snowball Method Works

If the snowball still doesn’t make sense to you, it may make more sense after seeing this example.

Let’s say you owe money on five different liabilities as detailed below:

You’ve managed to consistently come up with $1,500 per month to pay down your debts. Here’s how it would work.

First, you’d make the minimum payments on all of your debts, which currently totals $1,036 per month. Then, you’d take the extra $464 you have left over and put that toward your lowest balance , debt 3. In month two, you’d finish paying off Debt 3 with a $21 payment. So, after making all of your minimum payments, you’d take the extra $458 left from your snowball and apply it to debt 4 until you pay it off.

Once debt 4 is paid off, your snowball would now be $579 per month, which you would apply to debt 5 until it is paid off. You’d continue until all of your debts are paid off, with debt 1 being next and debt 2 being last. Using the debt snowball method would take a total of 39 months to pay off the debt. Over that time, you’d pay $7,807.34 in interest payments. 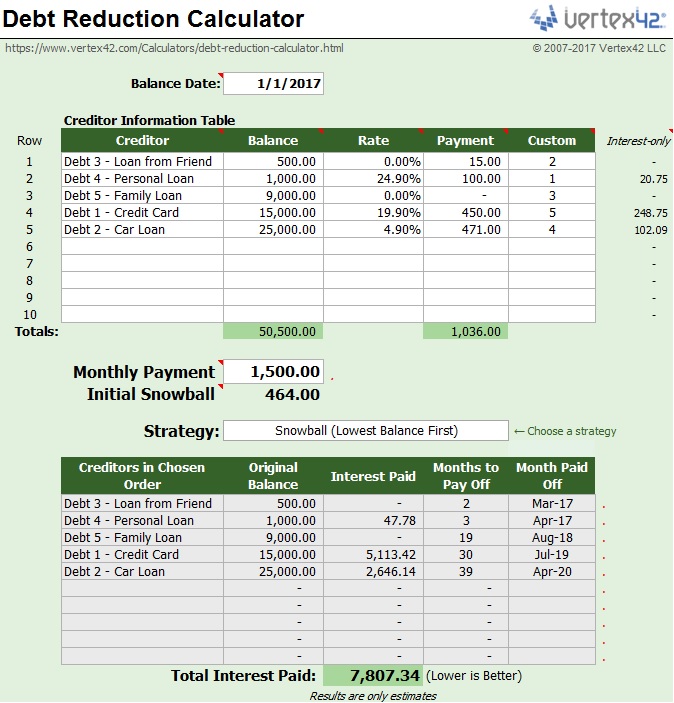 What Is the Debt Avalanche?

I don’t think there is a clear metaphor with the avalanche method like there was with the snowball method. Instead, I think someone was looking for another metaphor using snow and simply used an avalanche because of their raw power. This method to pay down loans is mathematically the fastest way to pay down your loans if you follow the plan exactly as it is written. However, if you fall off track because you didn’t feel like you were making progress fast enough, you may have been able to pay off the debt faster using the debt snowball.

An Example of How the Debt Avalanche Method Works

Here’s an example using the same exact debts and available money to pay down liabilities from the snowball example but instead using the debt avalanche methodology.

You’ll start the same way by making your minimum payments on all of your loans, using $1,036 per month. Instead of applying your snowball money, $464, to the loan with the smallest balance first, you instead call the money avalanche money and apply it toward the loan with the highest interest rate first. That means you’d pay off #4 first. You’d apply $564 in total during month 1, then $466.23 in month 2 to finish paying off the loan.

Pay Your Loan Off Faster 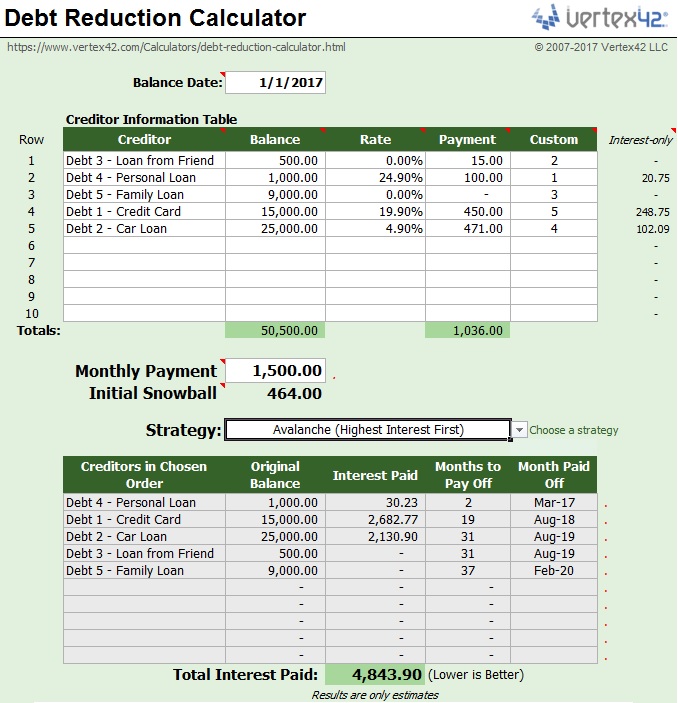 A Helpful Tool to See How These Work for Your Situation

Do you want to know how I ran the numbers and calculated how long it would take to pay off the above examples? I used a free spreadsheet I downloaded from Vertyx42.com, which you can find here. This spreadsheet is the exact spreadsheet my wife and I used when we were paying down her student loan. It was super helpful.

If you’re trying to increase your credit score, neither of these methods may work best. The most important aspect would be making all of your minimum payments on time each month. Then, your next goal would be to get your balances owed down to 30 percent or less of your total credit limit on each line of credit.

Another thing to keep in mind is who you’re paying back. In our example, you have a loan from a friend and a loan from a family member. How would your friend and family member feel if you used the avalanche method? They will feel like you took advantage of them and waited to pay them back until you paid back all of your other liabilities first. Similarly, using the snowball method, you’d be paying back your friend first, but then a personal loan before paying back your family. These are all important things to consider that neither method takes into account.

What My Wife and I Ended up Doing

When you’re formulating your plan, there are two main things to keep in mind. First, the most important thing is to get started. Even if you choose the less optimal method in this example, it only takes two more months to pay off $50,500. The second thing is you can always change your mind on which method to use. If you started with the avalanche approach and get frustrated, switch to the snowball method to get a quick win. Then, once you’re feeling better about paying off your loans you can switch back to the avalanche method.

Congratulations on beginning the journey to pay off your loans. When you get to the end of the journey, you’ll be thankful you did.

As a business owner, profits are extremely important but on top of that, you want your employees to … END_OF_DOCUMENT_TOKEN_TO_BE_REPLACED

If you're looking to open your own hotel, you've come to the right place. This blog post will … END_OF_DOCUMENT_TOKEN_TO_BE_REPLACED

Working in the chemical industry can be a dangerous job. There are many risks involved with working … END_OF_DOCUMENT_TOKEN_TO_BE_REPLACED

Disruptions to your business can come in all shapes and sizes. Sometimes, they are relatively minor … END_OF_DOCUMENT_TOKEN_TO_BE_REPLACED

Things have changed since the old days of business. In the old days, everything was done manually, … END_OF_DOCUMENT_TOKEN_TO_BE_REPLACED