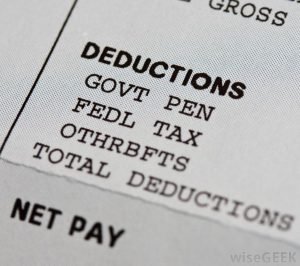 It’s easy to get into debt. Why? Banks want you to take out debt. The problem is car loans, mortgages, personal loans and credit cards all let you spend more than you earn. Banks love earning interest on the debt you owe them. Unfortunately, many people dig themselves deeper into debt than they realize thanks to a common misunderstanding.

Your Salary and Your Net Pay Aren’t the Same Thing

Unfortunately, there are usually quite a few deductions between salary and net pay. That means there is usually a large difference between what you think you have available to spend each year and the actual amount you have available to spend each year. While most people do understand their net pay will be lower than their gross pay, they often underestimate just how much lower their net pay is versus their gross pay.

How Lenders Take Advantage of You

Banks take advantage of the fact many people don’t realize there could be a large difference between your gross annual salary and your net pay.

Another common example is the 20/4/10 rule for auto loans. The rule states you should put 20 percent down on a loan that is no longer than four years and spend no more than 10 percent of your gross income on the car payments.

Both of these focus on your gross income, not your net pay or net income. If you fall into this trap, you could be in for a nasty realization. A dive into the difference between gross annual salary and net pay will probably open your eyes.

Usually, there are quite a few deductions fighting for your salary dollars. Some are mandated by the government, while others are voluntary. Unfortunately, these deductions are rarely the same for everyone. Thankfully, there are tools you can use to get a rough estimate of how much each will deduct from your paycheck.

There are quite a few mandated deductions that will come out of your paycheck, but they vary by person. For instance, almost everyone has federal income tax withheld from their paychecks. States that have an income tax will likely require state income tax to be withheld. Surprisingly, some localities even have income taxes that are withheld, too. These taxes will be withheld based on your salary and the information you input on the Form W-4 or equivalent state or local form you most recently filled out.

In 2017, if you earn more than $127,200, you no longer have to pay Social Security tax for any earnings over $127,200, but you do have to pay the Medicare tax. That means your paychecks at the end of the year after you reach the $127,200 limit will be a bit higher than your paychecks from earlier in the year. The limit changes every year. If this affects you, make sure to look up the updated limit at the beginning of each year.

Not all deductions from your paycheck are mandatory. In fact, there are quite a few voluntary deductions that you’ll likely see on your paycheck. The most common of these are employee benefits like health insurance, dental insurance, vision insurance, life insurance, short term and long term disability insurance and retirement plan contributions. The amount of each of these deductions will vary depending on your employer’s programs. Depending on what you choose, they can take a hefty portion of your gross pay.

Your Net Pay Is Usually Much Less than Your Salary 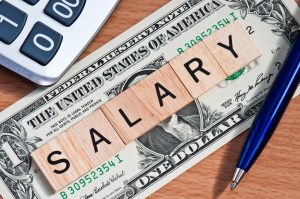 If you want to calculate the results of a hypothetical paycheck like we did, you can use this salary calculator at PaycheckCity.com.

If you did go with the 36 percent of gross income for all debt, you’d only have $13,916 for all of your other expenses. You’d have to pay for auto insurance, fuel, all of your utility bills, your groceries, dining out, clothing, entertainment, hobbies, education, gifts, healthcare, household supplies, pet expenses, vacations and any other expense you can think of with just $1,160 per month.

How You Should Evaluate Debt You’re Considering

Gross pay is a real number. It just isn’t a number you should be using to make financial decisions in regards to debt payments or how much money you can spend every month. If you fall into this trap, you’ll quickly start incurring more debt than you can manage. Rather than focus on gross income, take a good look at each paycheck to see your net pay numbers. Base your expenses and debt payments off of these numbers, not what others say you can afford.

There’s nothing wrong with spending only 10 percent of your net pay on housing or buying a car in cash so none of your net pay goes toward a car loan. Banks won’t be a fan because they won’t be earning interest from you, but you shouldn’t aim to please banks. You should aim to set yourself up to be financially successful. It’s important to understand how your money works. Learning how to make decisions based on net pay rather than gross pay is a great step in the right direction.

If you’ve dug yourself into a decent amount of debt, it’s nothing to be ashamed of. Start working to correct the errors you’ve made in past. Start spending less than your net pay. If you have a large car loan you can’t afford, sell the car and buy a cheaper car. It may not be fun, but your finances will be in much better shape.

Read how My Wife and I Paid Off 80k of Student Debt in 3 Years.

There are so many things that can go wrong when you run your own small business. You’re on a tight … END_OF_DOCUMENT_TOKEN_TO_BE_REPLACED

Starting your own business can be daunting for any budding entrepreneur. It’s about having the … END_OF_DOCUMENT_TOKEN_TO_BE_REPLACED

Sustaining an injury can be a nightmare for many reasons, and it’s important that you know how to … END_OF_DOCUMENT_TOKEN_TO_BE_REPLACED

When it comes to your finances, you may find that you just don’t really know where to start with it. … END_OF_DOCUMENT_TOKEN_TO_BE_REPLACED

Did you know that family-owned businesses generate most of the world's wealth? Take the United … END_OF_DOCUMENT_TOKEN_TO_BE_REPLACED