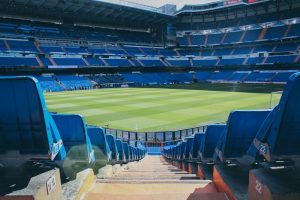 It makes sense that the world of professional sports would be a competitive one, though many people don’t realise that this also applies to the business that surrounds it. There are a lot of companies that seek to profit out of the sports that people know and love. Of course, though, this sort of industry can be just as difficult to master as the games themselves. To give you an idea of how this impacts the world of sport, this article will be exploring some of the biggest challenges that sports teams and companies face when they’re trying to make money in this field.

Sponsoring specific teams is a common way for companies to make money out of sports. Businesses will often choose teams that are close to their founding cities and towns, while others will pick those that seem as though they will be the most lucrative. Of course, though, it only matters if the teams are successful. Tournaments tend to eliminate sports teams that underperform, and this means that they won’t get anywhere near as much screen time as those that are winning, making it difficult for businesses to get value out of their sponsorships.

Alongside choosing the right teams for sponsorships, companies also have to work hard to make sure that they leverage their sponsorships correctly. This can be a challenge, as sports fans don’t want to have brands shoved down their throats, and many players don’t want to have their names plastered over marketing materials. Many businesses choose to hire sports players directly for their marketing, giving them the chance to leverage their sponsors further. Much like sponsoring a team, though, this will only work if the player being chosen is successful.

Big businesses are always looking for ways to make money out of things like sports. This has lead to some of the world’s largest sporting arenas and stadiums being built by companies that would usually only handle things like telecoms. Some of the worst NFL stadiums and other sporting arenas are made by businesses, with high ticket prices and poor layouts making them less popular than those that are designed by teams. This sort of investment can prove to be an incredibly bad one, though it can also be very lucrative if the right choices are made along the line.

Companies will often form strong connections between sports teams and their brands, and this can impact the image of both parties. Controversies involving a player’s personal life can impact the businesses that sponsor them, and this can be an expensive issue to overcome when marketing efforts have been made across the board. Many businesses will choose to simply pull out of sponsoring those that are found to break the law or do other morally questionable things, though this isn’t always the case, and it can be hard for a company to recover from this.

The last couple of years have been very hard for many sports teams and companies. The Covid-19 pandemic has made it impossible for many events to go forwards, and this means that both stadiums and the teams themselves have been unable to make the money they need to be considered lucrative. This sort of issue can be overcome with the right work, though businesses will usually have to change their approach to make it work. World events can have a similar effect on this, with things like the Olympics often having a negative effect on smaller sports companies.

Sports teams are able to make money through a variety of different methods, from gathering sponsorships to winning tournament prizes. Of course, though, while this can serve as a vessel for marketing, companies that take on sports teams will also have to manage the business of the team itself. This can take huge amounts of work and resources, and the companies that go down this route will often have to spend a small fortune to make sure that the teams they run are able to find success.

With all of this in mind, it should be easy to see how the world of professional sports can impact businesses. Many companies rely on this field to be able to make their money and reach out to new customers, but this can involve quite a lot of risk. Teams underperforming can have a massive impact on a business’s ability to make money, though this can be overcome with the right action.

As a business owner, profits are extremely important but on top of that, you want your employees to … END_OF_DOCUMENT_TOKEN_TO_BE_REPLACED

If you're looking to open your own hotel, you've come to the right place. This blog post will … END_OF_DOCUMENT_TOKEN_TO_BE_REPLACED

Working in the chemical industry can be a dangerous job. There are many risks involved with working … END_OF_DOCUMENT_TOKEN_TO_BE_REPLACED

Disruptions to your business can come in all shapes and sizes. Sometimes, they are relatively minor … END_OF_DOCUMENT_TOKEN_TO_BE_REPLACED

Things have changed since the old days of business. In the old days, everything was done manually, … END_OF_DOCUMENT_TOKEN_TO_BE_REPLACED