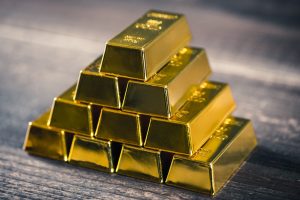 No, we’re not talking about Instagram models. We’re talking about the most valuable metals on earth—things like gold, silver, and platinum, and lesser-known metals like ruthenium, rhodium, and rhenium.

Precious metals are valuable for their extreme rarity, their beauty, and their usefulness in modern technology and industry. In fact, most of them are only used in industrial applications. Just a few—gold, silver, platinum, and palladium—find their way into coinage and jewelry.

Either way, precious metals have attracted the human imagination for millennia. Here’s a list of some of the most valuable metals and how much they’re worth.

Let’s begin our list with the most valuable metal on earth.

This distinction is reserved for rhodium, which is an extraordinarily rare precious metal. It’s a silvery-white metal, very similar to platinum in appearance; in fact, rhodium belongs to the platinum group of metals.

Despite being one of the most valuable metals, rhodium’s principal application is in the automotive industry where it’s used in catalytic converters. The main source of rhodium is South Africa, followed by the Ural Mountains region of Russia.

Palladium has the least density of the platinum group metals, and it also has the lowest melting point.

Palladium is most often used in automobile catalytic converters; its ability to absorb hydrogen makes it useful in fuel cells and hydrogen storage. Less frequently, palladium has been minted into coins.

South Africa, Russia, and Canada are the top global palladium producers. As of October 2020, the price per ounce of palladium was $2,400.

Of course, you can always find gold on anyone’s list of the most valuable metals in the world.

It is the king of precious metals, if not necessarily the most valuable of them. Gold has always been prized for its luster, its color, its durability, and its well-known malleability—it can be shaped for different purposes.

The major world producers of gold are China, South Africa (the top producer for over a century), the United States, and Australia.

Iridium is yet another platinum group precious metal.

It is the most corrosion-resistant metal, it is extremely dense, and it has a high melting point (4,435 °F). These properties make it ideal for industrial applications, as a hardening alloy, and in medical technology and electronics.

Significant iridium deposits are found in South Africa, in the Sudbury Basin in Canada, and the Norilsk region of Russia. As of October 2020, the price per ounce of iridium was $1,600.

When asked, “what is the most valuable metal on earth?”, most people will answer “platinum.”

Platinum is a beautiful, silvery-white metal that’s prized for its density, malleability, and resistance to corrosion. Of course, this makes it ideal for being pressed into coins and bars of the kind found at dealers, such as American Precious Metals.

Large platinum deposits can be found in South Africa (77% of global production), Russia, and the Sudbury Basin in Canada, the site of an ancient impact crater.

Osmium is a very dense, very brittle bluish-white metal of the platinum group.

The brittleness of osmium militates against its widespread use in industry; still, as an alloying agent, it’s used to confer its high heat-resistance and hardness to platinum.

Once again, osmium is mined in the igneous formations of South Africa, the Sudbury Basin of Canada, and Norilsk in Russia.

Ruthenium is one of the lesser-known platinum group metals.

This precious metal bears the same silvery-white appearance as other platinum group elements. The uses for ruthenium are largely restricted to industrial applications, such as wear-resistant electrical contacts.

Because of its greater durability, ruthenium is also used as an alloying agent to increase the strength and hardness of other platinum group metals, like platinum and palladium.

Ruthenium derives from deposits in the Ural Mountains of Russia and deposits in South America and the Sudbury Basin of Canada. 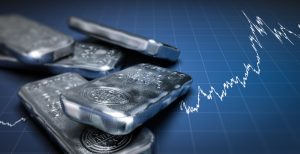 Silver needs no introduction. Its famous white luster is unmistakable; it also has the highest electrical conductivity and reflectance of any metal.

Silver is much sought after for use in jewelry, coins, bars, to say nothing of industrial applications. These latter have become more pronounced in recent years as the electronics industry takes up a larger share of worldwide silver demand.

The earliest coins, of the Lydian kingdom, were of electrum—an alloy of gold and silver; the Roman denarius remained the standard coinage of the empire for many centuries. More recently, the famous American Morgan silver dollar is well known to all coin collectors.

Mexico, China, Peru, and Chile are all top silver producers. As of October 2020, the price per ounce of silver was about $24.

This makes it one of the most valuable metals for industrial applications. Added to high-temperature super alloys, rhenium is used in jet engine parts, such as the engines of the high-tech F-22 and F-35 fighter jets.

The primary reserves of rhenium are found in Chile, and there is even a naturally occurring rhenium sulfide mineral that precipitates from volcanic outgassing in the Kuril Islands.

Finally in our list of valuable metals comes indium, which is a byproduct of zinc refinement.

Indium is a whitish metal and is quite malleable—which makes it easy to mold into desired shapes. Formerly of great use as a corrosion-resistant coating in the engines of aircraft during the Second World War, indium has now found many applications in electronics.

Indium is produced by China, South Korea, Japan, and Canada.

Get Educated on Valuable Metals

The most valuable metals in the world are prized for their beauty and rarity, as well as their technological usefulness. The value for some of them tends to fluctuate, depending on demand for certain technologies, or changing manufacturing methods.

Still, we’re pretty certain gold, silver, and platinum will be desired by humans for a long time yet. As for rhodium… who can say?

If you’ve enjoyed this article, please check out our other posts on money and investment.

Every business owner, especially those in leadership positions, should prioritize learning and … END_OF_DOCUMENT_TOKEN_TO_BE_REPLACED

When it comes to business, a lot of things go into making it successful. But at the end of the day, … END_OF_DOCUMENT_TOKEN_TO_BE_REPLACED

There are many mechanics in the world. Some choose to specialize in a certain make of car or truck, … END_OF_DOCUMENT_TOKEN_TO_BE_REPLACED

You never know when you might need some emergency money. From a problem with your home to losing … END_OF_DOCUMENT_TOKEN_TO_BE_REPLACED

Are you thinking about investing in property? This is a smart choice if you are interested in … END_OF_DOCUMENT_TOKEN_TO_BE_REPLACED