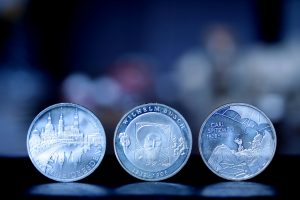 Coin collecting is one of the most rewarding and enjoyable hobbies you can cultivate.

No, you counter, coin collecting is for old fuddy-duddies. What’s the point? Aren’t the only coins we have these days digital cryptocurrencies, like Bitcoin?

Of course, that’s all the better reason to take up collecting old coins. Everything these days is fake, unreal, digital. But whether you take to silver coin collecting or gold coin collecting, there ain’t nothing like the real thing, baby.

So let’s take a look at some of the benefits of coin collecting—and collecting silver coins in particular.

1. Own a Piece of History

First of all, collecting silver coins means you get to own a piece of history.

Silver coinage is among the most common types of currency. Gold coinage, on the other hand, is rather rare—while spectacular, not much of it was crossing palms in everyday trade exchanges.

But from the denarii of the sprawling Roman Empire to the Morgan silver dollars of the Old West, you can bet silver coins participated in just about every era of human history.

The short answer is yes. And that means you can actually make some money from your hobby of silver coin collecting. This is one of the most obvious coin collecting benefits.

Most coins increase in value over time. Plus, silver is one of those precious metals that’s always increasing in value. That’s why your silver coin collection is likely to steadily increase its price.

And if you need to make some extra money, you can always trade them to buyers like American Precious Metals.

Collecting silver coins is a fascinating and exciting challenge.

The pursuit of rare and unusual coins, or finding a valuable coin at a decent price, is often worth the effort alone. In fact, that’s why many people take up coin collecting in the first place—a worthwhile challenge to pique their interest.

This is related to our first reason.

While you’re busy buying a piece of history, you’re also learning about history. The educational aspect of coin collecting is one of the most overlooked parts of the whole hobby.

Once you start chasing Greek tetradrachms and Ptolemaic staters, Persian sigloi and Spanish dollars, you’re learning about the most fascinating periods in human history without even knowing it.

5. Pass on Something of Value

Inflation is a growing menace, and as cryptocurrencies and credit cards have taught us, actual money—whether paper or metal coins—is in danger of becoming extinct.

But collecting silver coins means accumulating something that can be passed down through the generations. It’s an important investment in real objects that are only likely to accrue value over time.

Why You Should Begin Silver Coin Collecting

As a hobby, it can be lucrative, educational, and just plain fun. So stop thinking about starting a silver coin collection—get out there and start collecting today.

We hope you enjoyed this article. While you’re here, please check out the rest of our site.

Disruptions to your business can come in all shapes and sizes. Sometimes, they are relatively minor … END_OF_DOCUMENT_TOKEN_TO_BE_REPLACED

Things have changed since the old days of business. In the old days, everything was done manually, … END_OF_DOCUMENT_TOKEN_TO_BE_REPLACED

In the last twelve months, two out of three businesses made price adjustments to their products and … END_OF_DOCUMENT_TOKEN_TO_BE_REPLACED

Starting a business can be a very exciting and challenging time in your life. Some people know they … END_OF_DOCUMENT_TOKEN_TO_BE_REPLACED

If you have a small or medium-sized business and have not started outsourcing yet, you may need to … END_OF_DOCUMENT_TOKEN_TO_BE_REPLACED