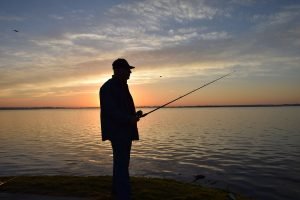 Have you heard the story about the fisherman? If not, you’re not alone. It’s something you need to hear. It very well could change your life.

Now, on to the story.

The Story of the Fisherman

An American investment banker was at the pier of a small coastal Mexican village when a small boat with just one fisherman docked. Inside the small boat were several large yellowfin tuna. The American complimented the fisherman on the quality of his fish and asked how long it took to catch them.

The fisherman replied, “Only a little while.”

The American then asked why didn’t he stay out longer and catch more fish?

The fisherman said he had enough to support his family’s immediate needs.

The American then asked, “but what do you do with the rest of your time?”

The fisherman fisherman said, “I sleep late, fish a little, play with my children, take siestas with my wife, Maria, and stroll into the village each evening where I sip wine, and play guitar with my amigos. I have a full and busy life.”

The American scoffed. “I have an MBA from Harvard, and can help you,” he said. “You should spend more time fishing, and with the proceeds, buy a bigger boat. With the proceeds from the bigger boat, you could buy several boats, and eventually you would have a fleet of fishing boats. Instead of selling your catch to a middle-man, you could sell directly to the processor, eventually opening up your own cannery. You could control the product, processing, and distribution,” he said. “Of course, you would need to leave this small coastal fishing village and move to Mexico City, then Los Angeles, and eventually to New York City, where you will run your expanding enterprise.”

The fisherman asked, “But, how long will this all take?”

“But What Then?” Asked the fisherman.

The American laughed and said, “That’s the best part. When the time was right, you would announce an IPO, and sell your company stock to the public and become very rich. You would make millions!”

The American said, “Then you could retire. Move to a small coastal fishing village where you could sleep late, fish a little, play with your kids, take siestas with your wife, and stroll to the village in the evenings where you could sip wine and play guitar with your amigos.”

What Did You Get From the Story?

The whole point of the fisherman story is to open your eyes. There are other options besides what society teaches us.

Of course, after a bit of thinking, you come to the realization that you probably can’t easily take your life to the point of that of the fisherman. If you didn’t work as much, you wouldn’t get to live in your house with your new car and eat out at restaurants multiple times per week. Instead, you’d have just enough to get by. It would be on a very basic level, but you would be rich with time, family and friends.

The more I thought about it, it seemed like living the life of the fisherman would be impossible for me. That said, it was still very alluring.

Why the Fisherman Story is So Alluring

So we’ve established that the fisherman story is alluring to so many people. But why? Why does the life of minimal work and just hanging out with friends and family appeal to us?

For some people, the lifestyle appeals to us because we hate our jobs. If you don’t do something you love, work can be a forty plus hour trudge through every week.

For others, money is a source of major pain in their lives. Whether you’ve taken out more debt than you can realistically afford or you simply have a serious case of FOMO, most people find something to be miserable about in their financial lives. We always want, bigger, better and more expensive things and experiences. Once we obtain them, the dreams keep growing.

The fisherman seems so content just going out and fishing for enough food to feed his family and take care of his basic needs. He doesn’t want the bigger and better things that so many of us dream of. The fisherman doesn’t overextend himself to where he owes others large sums of money. He is self-sufficient.

You Can Live the Life of the Fisherman

Living the life of the Fisherman is completely possible. It just goes against everything we’ve been taught in our society. Yes, you could find a job that allowed you to work less than full-time. You could earn just enough to be self-sufficient and support your family. You’d have to live a frugal lifestyle in a low cost of living area, but it could be done. Another way this could be accomplished is by having extremely high paying work. You wouldn’t have to be as frugal, but keeping high paying work on a part time basis might be difficult.

Of course, if you lived this lifestyle, you’d be setting yourself up for financial ruin. If anything goes wrong, your just getting by budget could be wrecked. You’d essentially be living paycheck to paycheck with nothing to fall back on. If you got injured or sick and couldn’t work, you’d likely go into debt. Then, you’d have start working more hours when you do get better to pay off that debt.

The American Investment Banker Actually Has Some Good Points

Alternatively, you can do what the American investment banker suggests. You can work hard for years and build a business to sell. You could have money set aside for emergencies and have all of the fancy things you could afford, but you’d likely be spending the majority of your time working on your business. Building a business big enough to sell for millions doesn’t usually happen working a few hours a week like the fisherman did.

Here’s another option. You can work in a traditional job for decades and invest a significant portion of your income until the earnings from your investments replace your income. Depending on how much you earn, how much you spend, and how much you invest, you could walk away after just a couple decades. 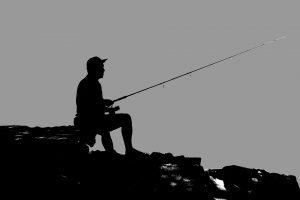 As with most things in life, neither the fisherman nor the American investment banker have everything figured out.

The fisherman provides for his family for now, but what will happen down the road? While it is possible the fisherman will be able to fish until the day he dies, it is unlikely. The maintenance required on his boat and the physical nature of his job means one day he will no longer be able to fish. What will he do then? If he only worked enough to provide for the present, he’s left a huge burden on his children because they’ll have to support the fisherman in his old age.

The American investment banker has some flaws as well. Not all businesses are able to be sold making their owners rich. If the business had an unexpected downturn for reasons that may or may not be in the fisherman’s control, he could have worked for decades to build a business that nets him nothing. The investment banker could learn a lot about enjoying life, family and friends from the fisherman, as well.

Balance Is the Key

In reality, you need to be somewhere in the middle. Find a job you love so going to work isn’t such a chore. Earn a decent income, make sure you spend less than you earn and invest the rest for your future.

If you’re smart, you can take breaks along the way. Take some time off between jobs or take a sabbatical from work. Try your best to leave the worries of your job at work so you can be present in the time you have off in the evening and on the weekends with friends and family. What’s even better is finding a job that actually respects your time off, gives you plenty of vacation and keeps you from working overtime just for show.

As a business owner, profits are extremely important but on top of that, you want your employees to … END_OF_DOCUMENT_TOKEN_TO_BE_REPLACED

If you're looking to open your own hotel, you've come to the right place. This blog post will … END_OF_DOCUMENT_TOKEN_TO_BE_REPLACED

Working in the chemical industry can be a dangerous job. There are many risks involved with working … END_OF_DOCUMENT_TOKEN_TO_BE_REPLACED

Disruptions to your business can come in all shapes and sizes. Sometimes, they are relatively minor … END_OF_DOCUMENT_TOKEN_TO_BE_REPLACED

Things have changed since the old days of business. In the old days, everything was done manually, … END_OF_DOCUMENT_TOKEN_TO_BE_REPLACED